a bit on job-searching 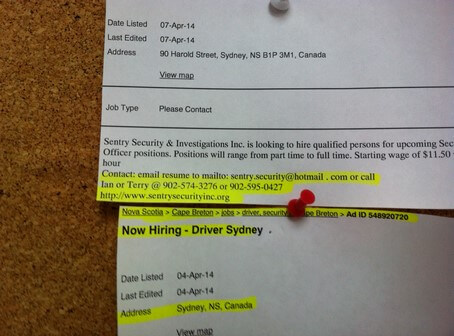 Back in January when I set my “four simple goals”, I was really gung-ho and thought for sure I could have a job lined up for post-graduation by April.

I did line up my work term in January, and then I focused on my schoolwork and thought, “There is plenty of time to job-search. Months, even!”

There was one time back in January or early February that I went in to the Northside Employment and Resource Centre just to check it out, and when chatting with the staff there was told that it was a good idea to come in regularly, just to get known there. I thought, “I’ve got Monday afternoons free of classes, so I’ll go in every Monday afternoon.”

But then, life happens. Other things come up, other things take priority. So it was just yesterday when I found myself home from school a bit early and over by the Employment Centre anyway at the post office, and decided to go in. I wasn’t really sure what I would do there — sit on my computer and job search, I guess? — but you’ve got to start sometime. I was, admittedly, a bit nervous. I’m not even sure why, but I was.

I went in and chatted with a staff member. She showed me the job boards and told me about the services of the Centre. I talked with another lady about a program called “Career Focus” that is for 30-and-under recent graduates who have never worked in their field before, and filled out an application. Then I looked around, looked at the job postings on the boards, said thank you and that I would be back next week, and went home.

It was through the Baddeck Employment Resource Centre that I got the funding to attend NSCC two years ago and I’d be remiss if I didn’t say that the staff there are top shelf, just fantastic.

One important part of “figuring out the next step,” I think, is actually “being OK with not knowing what the next step is”. That doesn’t mean, “doing nothing and hoping something falls in my lap,” but it does mean that it is good and healthy to work towards several next steps at once, while intentionally practicing trust that the future, no matter what it looks like and what job I’m doing in it, will be abundant.

Are you a great job seeker? Do you hate it? Any other random thoughts on it you’d like to share? I’m game. 🙂

5 Responses to a bit on job-searching