New Year’s Eve, as you no doubt are aware, is the time when a lot of people set goals or resolutions. It’s a natural turning point, a time to look back at the year behind us, and look ahead to the year just starting. It’s exciting and personally, I’ve always enjoyed the chance to do some reflection on a whole year wrapping up, and think about what the next year holds for me.

In years past I filled out a long questionnaire (this is a post on my old blog, huminbean, with the 35-question list, in case you’re interested). I would print out my answers and save them in a personal journal. I did that for a few years, and while I do like to go back from time to time and read what I wrote, especially because there are lots of things from each year that I don’t remember anymore, I find that there are only a few questions where the answers really change year to year. (The “personal fashion statement” one, for me, is sadly the same – jeans and tee shirts – as always.) It’s a fun exercise but things change and evolve, and I’m finding the older I get, the busier/lazier I get too.

So this year I’m tagging along with two trends I’ve seen in the blogosphere: Four Simple Goals (on A Beautiful Mess) and One Little Word (originally by Ali Edwards, and seen by me on Elise Blaha’s blog Enjoy It.)

As you can probably tell by the words “simple” and “little”, the idea is to keep it simple. Last year I did pick a word, thinking I would try the “one little word” idea out, and the word was “Realistic”. But nothing much came of it, other than writing it in my journal and thinking about it for a few days afterward, and at a few times throughout the year (“Oh yeah, I picked a word for this year, what was it?”)

This year I pondered a bunch of words. Magic, thrive, open, joy, etc. Those words are kind of obvious, but they definitely fit the bill of one little word that could carry you through a new year. They’ve got lots of potential but they also make sense. Who wouldn’t want magic, or to thrive, or to be open and joyful? But none felt right for me. I went for a walk and let my brain mull and toss words around. And the word that came up was a strange one: deal.

But the more I thought about “deal” the more it felt like a fit. The last few months of 2013 were a bit difficult for me (I tack the word “bit” on there to make it seem like less of a shitshow and downplay how much I felt like just running away, several times), but I came through it. I dealt with it. Deal with it, Noble. That’s my new mantra. So much – so much! – of the things that stress me out are really not a big deal. When I take a deep breath, take a step back, and then “put on my big girl panties and deal with it,” (i.e. see a counsellor, write in my journal, and then deal with it) it’s totally do-able. So the word “deal” works that way.

Then there is the thought that life is a deal. It’s a compromise, a trade. We get to live this amazing life, but we are also alive, human, fallible. Shit happens. For real. But then sometimes you get a sweet deal. And then there is “let’s make a deal,” like let’s do some business. Or “deal the cards,” like playing a game. Or “the hand you’re dealt.”

And then the word “deal” flipped itself around and turned into “lead”. And it felt like the two needed to be together so I left it like that. To lead – sometimes people say I’m a leader. And I feel like a leader, sometimes. Other times I feel like a big old con artist, like “if people knew how small I can feel in my head, they wouldn’t think that!” But leading is important. And I want to continue to lead, in whatever weird and goofy way I do that, in 2014.

Also the word “lead” makes me think of a dog at the end of a leash, and how that dog is rarely content just to walk on the leash, it’s constantly pulling you forward or making you tug her out of a ditch. This is how life is. Very little slack and lots of pulling you forward whether you like it or not. And then there are the Four Simple Goals. I did a lot of thinking about these, and considered a number of different things I’d like to do more of in 2014. But in the end I narrowed it down to the four you see here. 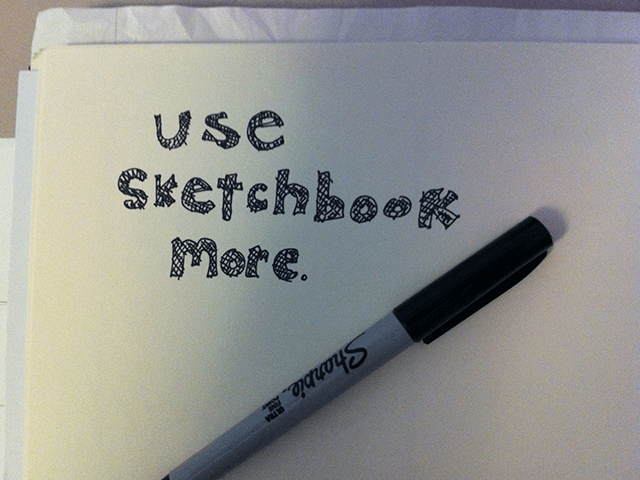 Use my sketchbook more // As a graphic design student, there are lots of projects to work on at a given time. And time is elusive and so it’s tempting to go with my first idea, sit right down at the computer and just get ‘er done. Sometimes that’s exactly what you need to do, too. But, last year I sketched a lot more than I have done this year. It very likely was because I knew the teacher was going to collect the sketchbook at the end of the term and she was expecting to see process pieces for all our work. But I miss the hand-to-paper connection, and I miss trying out ideas in pencil first, and having a variety of ideas to choose from. Plant a garden // My Mom has gardened since before I can remember. I love plants too and when I lived with her, I’d have a bed of my own for tomatoes (my favourite!). The last two summers, although I have a place of my own now, I haven’t had time to garden because I was too busy working and going back and forth between North Sydney and Baddeck. I had pots on the deck but that’s just not the same. This year I want to break ground and make some plants grow. Move every day // Physical activity does so damn much for me, it’s crazy to think I’d consider not doing it. Yet, I fall victim to inertia, and get lazy. But every time I get up and go for a walk, or do some yoga, or whatever, I always end up feeling good. I work shit out. I think things through. I mull. I get distracted from myself, and that relaxes me too. But I get all intimidated sometimes thinking I must have rock-hard abs or some other measure of physical perfection, in order to just do what the human body is meant to do, and move. Eff that. More movement in 2014. Figure out the next step // School is ending in June. And what happens to me after that is all up-in-the-air right now. I’ll be looking for a job, but I have no idea at this point what is available, and if I’ll get hired somewhere. I’m also considering getting more education, and possibly also self-employment. But they are all big question marks right now. And I’ll admit it’s all kind of scary and I’m trying not to freak out about it. (See above: “deal with it, Noble!“) So this one is a goal that would happen whether or not it was on a list, but I figure, to put it on the list is to be proactive about it and think of it positively. Instead of like a big scary unavoidable thing that I’ll try to avoid.

So there it is. One year ends and another begins. I wish you all a merry time tonight, whatever it is you’ll be doing, whether it’s going out and partying, or staying in with pyjamas and a movie. I hope you’re happy and healthy, and that 2014 brings you abundant blessings. See you there!