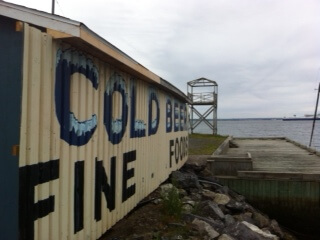 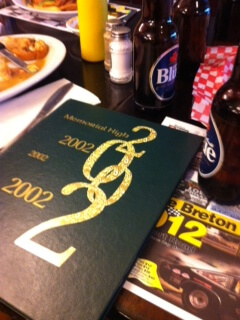 Last week I wrote a letter to the 2012 high school graduating class, inspired by the fact that it’s been ten years since I graduated from high school myself.

To mark those ten years, some others from my own graduating class and I got together this past weekend at Rollie’s Wharf, a bar and restaurant in North Sydney, for a small reunion.

(I had originally created the event on Facebook, and about 37 people clicked “yes, I’ll be there”. In actual fact, about 10 showed up. Lesson learned – do not trust Facebook event counts!)

But, it was small and intimate, and really good. A few of the people there I had seen in the years since 2002, but most I hadn’t.

There was one woman I didn’t even remember ever seeing back in school, but then with a class of over 300 people, I guess that’s normal!

And there were a few whose faces I definitely remembered, but who I didn’t ever really talk to back then. That was cool, too, to chat with them and get to know them as an adult, and to realize that hey, just because I always used to see this girl with this or that particular crowd, it doesn’t mean I actually know anything about her! Oh, assumptions. Ever present, and usually false.

A fair bit happens in ten years. Kids are born. You get married, or meet partners, or break up with partners. Get educated. Get jobs, or not, depending on the economy. It was really neat to hear about where people’s lives had taken them, and what they had been up to in those ten years. And to see their faces, and see a bit of age on them, but see ultimately the same faces. The same eyes, just a bit wiser now.

We had a few beers, ordered food, and looked at the yearbook that one of us had brought.

“I wasn’t there the day they were taking pictures, I was probably skipping!”