Q+A with the editors of Third Person Press 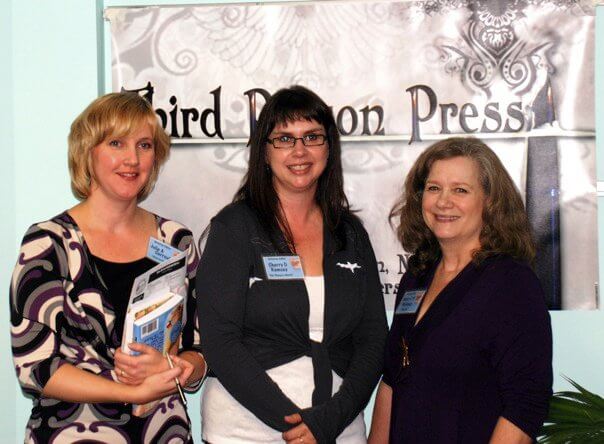 Third Person Press‘s newest anthology of short stories launches June 30th, from 3-5 in the afternoon, at the McConnell Library in Sydney. The launch is free, and open to the public.

1. How did you three editors come to know each other? How did Third Person press get born?

Sherry and Julie met long ago (in the 80’s!), when we worked together in a local law office, and quickly became fast friends, in no small part because of our shared interest in writing. When Nancy moved to Cape Breton in 2001, she immediately began looking for a writing group and was delighted to find one at the library five minutes from her house. This just happened to be The Story Forge, the writing group Sherry and Julie had started on the Northside some years before. So we’ve been friends, and writing friends, for quite some time.

Third Person Press was born out of a conversation that happened when the three of us were carpooling to a writing workshop. We were talking about how Cape Breton music had managed to grow beyond the stereotype of “everyone here plays Celtic music,” but how Cape Breton writing and writers still seemed to be pigeonholed.

And yet, here were the three of us, who were writing outside the stereotype. Could there be more writers like us? Could we find them? “Maybe we should publish our own anthology,” someone joked. Then suddenly it wasn’t a joke, it was something maybe we could actually do; as if saying the words had opened up the possibility. We had no idea what we were doing or how to do it! But we decided to find out.

In 2008, when we put the first book, Undercurrents, together, we had no plan to do a series; we chose the title and theme because we liked a watery feel for an island book, and we thought that’s what we were doing: one book. An experiment.

Then, when the first one went so well and we thought we might do another, staying with an elemental theme seemed natural. The Speculative Elements series came to be. Volume 2: Airborne was released in 2011. After that, we progressed to Unearthed, the current release. We plan to open submissions for Volume 4, the tentatively-titled Flashpoint, soon.

Incidentally, we have released another book outside the Speculative Elements series. To Unimagined Shores, Collected Stories of Sherry D. Ramsey came out in 2011. All of the stories in this collection, except one bonus story, were previously published in an impressive array of Canadian and international magazines, journals and anthologies. Sherry’s not one to toot her own horn, but anyone who’s sent their work off to publishers knows that this is no small feat.

In addition, we have plans to publish an anthology of ghost stories, coming out late in 2012 or early 2013. This yet-to-be-named anthology came about because we strive to give readers a variety of types of speculative fiction in our anthologies and so, haven’t been able to include all the good ghost stories we’ve received.

We know that ghost stories are popular here in Cape Breton and this seemed like a great way to share what we’ve enjoyed receiving from Cape Breton writers.

2. What have you learned about Cape Breton’s writing talent since starting the press?

We’ve learned that we were right about one thing—there are LOTS of writers here writing all sorts of things. And that there are also many CB writers who are willing to step outside their comfort zones and try their hand at something different, even if this is not what they usually write. They’ve interpreted the themes for each anthology—water, air, and earth so far—in so many unique and fascinating ways! The quality of the stories we’ve received is really impressive, and we’ve had submissions from a wide age spectrum, from university students to retirees. One of the great things about the whole adventure has been meeting and working with so many wonderful writers.

We should say here that we aren’t like many publishers in that we do try to give less experienced writers a chance. While we always strive to make our finished product a work of the highest quality in terms of writing and editing, we are ready and willing to work with writers in the revision process of making their story the best it can be. This doesn’t mean that we publish every story that is sent to us–far from it. We have had to reject dozens of stories for dozens of reasons over the last 6 years–not our favourite part of this job. So, nurturing less experienced writers doesn’t mean anything goes.

We would suggest that any writers interested in being published by us read and follow our guidelines and resist the urge to send their first draft no matter how wonderful they believe it to be. They should revise their stories as thoroughly as possible, have them read and critiqued by their own first readers, revise again and then, proofread for accuracy in all things. This increases the chances that they will get published. Having said that, we will read and consider stories that aren’t perfect. More often than not, our contributors are asked to do rewrites based on detailed critiques. And here’s where we are really different from most other publishers: if you are rejected, you will know why. We’ve actually gotten Thank You notes based on our rejection critiques. 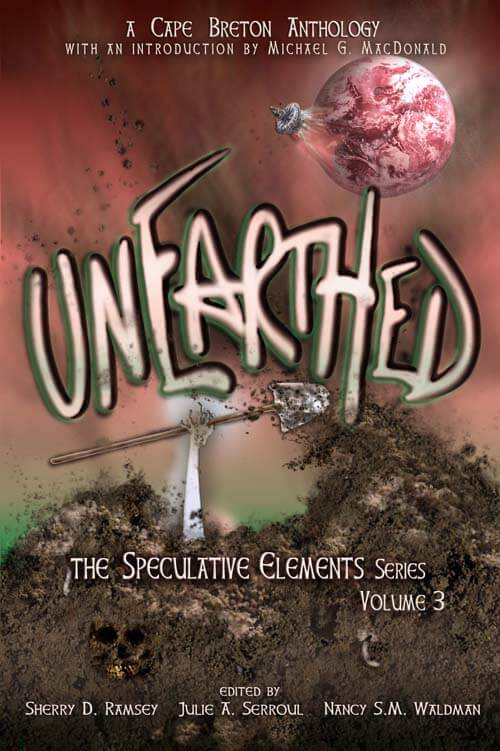 3. Tell us some of the highlights of Unearthed, the book being launched this month. Where are some of the places readers will go?

Unearthed is our largest collection to date, containing twenty-one new stories, all in the speculative genres—science fiction, fantasy, supernatural and horror. On the whole, this is probably the “darkest” of the anthologies so far, although there are light and humorous exceptions to that trend. It certainly offers a wide-ranging mix of stories, just as in all the anthologies. The back-of-the-book blurb encapsulates what readers can expect:

“Imagine what might arise from and disappear into the soil…what grows, what is buried, what teems unseen. This collection, exploring the ends of the Earth and beyond, offers tales from the depths of darkness: zombies, vampires, murky unknowable worlds, underground prisons, malevolent spirits—to the lightest heights: earthen magic, little people, buried treasure and fantastical creatures!”

As in the previous books, there’s a mix of writers with stories in Unearthed—some have appeared in other volumes in the series, some are new to us, and for some, this will be their first short story publication. We really think there’s something for everyone here!

We’d also love to encourage everyone to come out on June 30th at the McConnell Library, from 3-5, to attend the official launch of Unearthed.

Check out the Third Person Press blog, where you can read interviews with the authors of the newest anthology, Unearthed.

Read more Q+As with people from Cape Breton on this blog, here!