happiness is a frozen lake 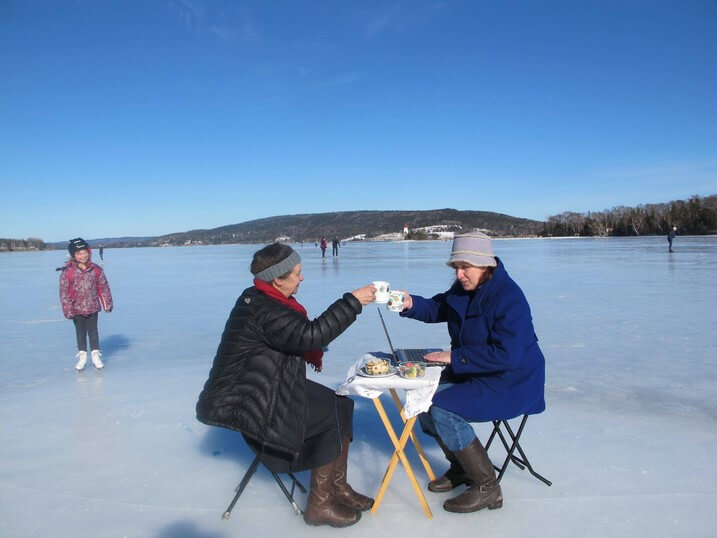 A few days ago, my friend Jocelyn Bethune posted some wonderful photos on her Facebook wall, that Simone Carmichael had taken. I shared one of them in the Dream Big Facebook group, and after that Jocelyn wrote to me to share what she had written on her new blog about the ice playground.

After last night’s rain, it may have been the last of the ice, but then again, who knows? Winter has been a trickster this year.

Here are Jocelyn’s words from her blog HistoryGeek. She’s a wonderful storyteller; enjoy!

There is a new playground in Baddeck and its making this long winter very bearable.

For probably only the second time in the last two decades, the Bras d’Or has frozen over. Oh, the lake down the Bay usually freezes, but now, you can step off the wharf in Baddeck and skate down the Bay. Or across to Kidston Island.

Today, under the brilliant blue sky, there were some 40 of us out there, on top of the waves, skating, flying kites, playing hockey and generally enjoying this otherwise unbearable winter. There were teens twirling around; three pink-outfitted girls with three very brilliant pink hockey sticks, a couple of kites flying high overhead, several hockey games and some races. And there was laughter. Lots and lots of laughter; sweet sounds floating up from the various pockets of activity. And even those folks who didn’t part take, stood on the shoreline and smiled.

It’s not like the lake has never frozen over before – it used to. All the time. Every winter. Until the 1950’s, the lake was bushed – cut trees were lined up in roadways so people would not lose their way as they traveled across the ice. And anyone who grew up here in Baddeck in the 60’s and 70’s has been reminded of their fond memories lately, of playing stick hockey on the bumpy ice; of racing snowmobiles down the bay and for true dare devils – doing spirally-donuts in a car with the icon lighthouse before you. And it was not just teenagers who did this – for years, one old guy was the barometer for the village. “If Red Rory has his car on the ice, then it’s safe.” At night, there would be bonfires scattered around the shorelines, as the magic went on into the night.

What adds even more to this sense of magic is the feeling that if we don’t enjoy this wonderful opportunity today, it could be gone tomorrow. With temperatures warming and some rain, well, maybe this day was our last day to enjoy the ice. We won’t even know until it is too late.

So if you haven’t gone on the ice yet, go! Feel the great expanse of space between Baddeck and the island. Take a look back at Baddeck and see home with a new perspective. Stand and look at the brilliant blue sky and how glorious it looks with the sea of white. Embrace the magic. It may be gone tomorrow.

And just for some more ice-related goodness, here is some lovely background music made on Lake Baikal. Or is that with Lake Baikal?

3 Responses to happiness is a frozen lake