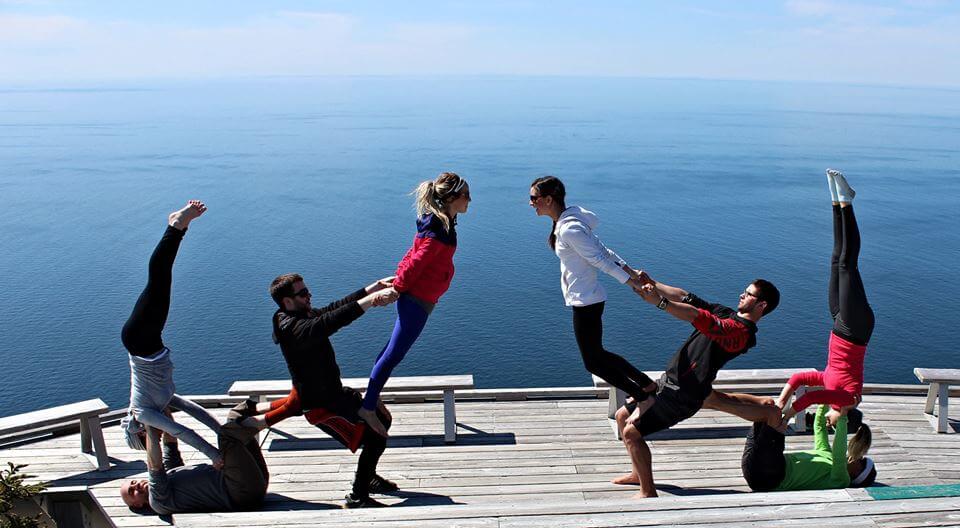 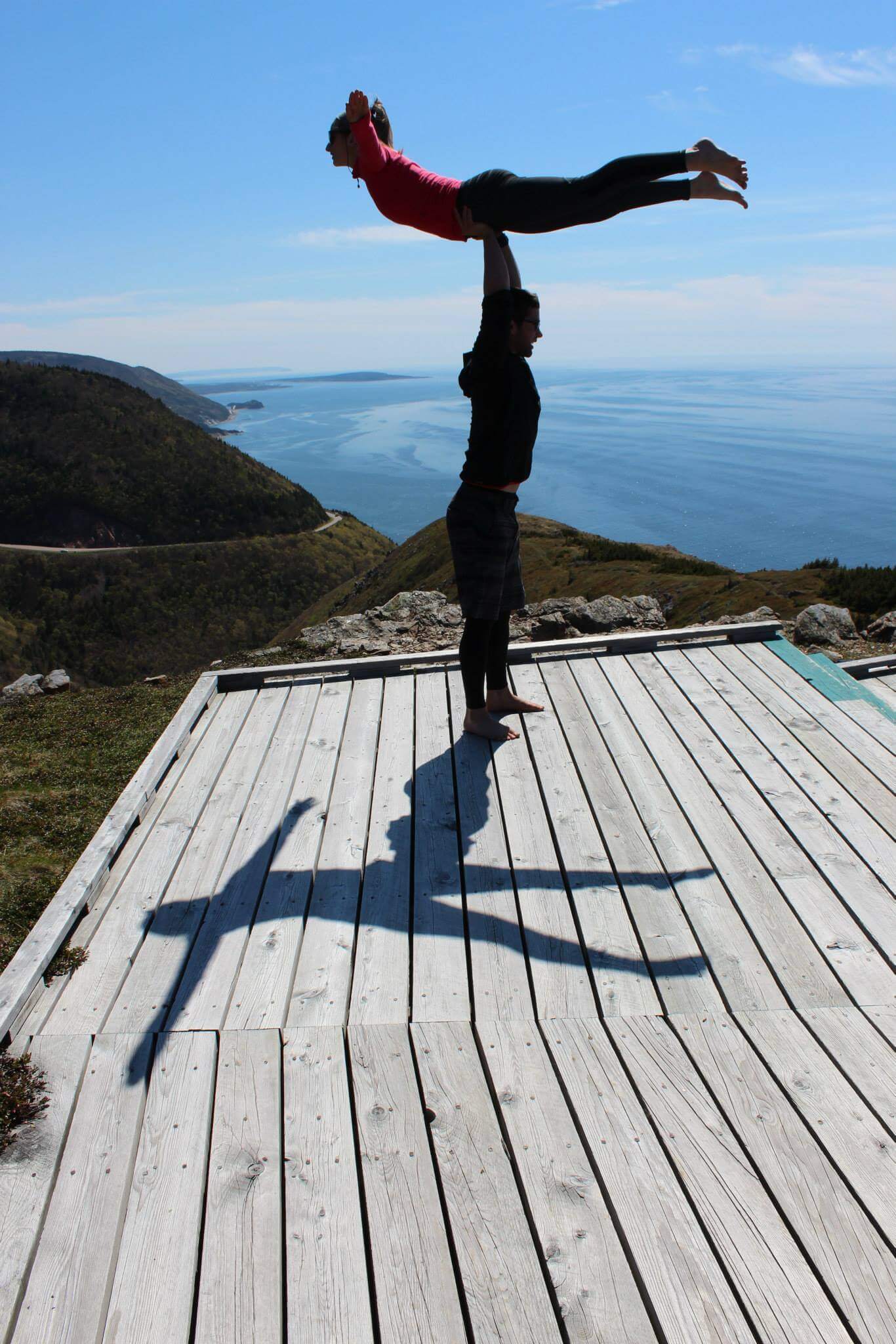 Last week my friend Jacquie Blanchard shared a couple of rad photos with me in an email. She had been up to the Skyline hiking trail in the Park and ran into some friends of hers doing something called acro-yoga. The pictures were from the Facebook group for the people practicing this activity.

I had seen the Facebook group online, “Liked” it, but never really looked into it. Now I went back for a second look.

I got in touch with the group and asked if they would answer a couple of questions for me and the blog. I heard back from John MacPhail, who wrote these answers for me. Photos are credit Brittany MacLeod.

1. Tell me about Cape Breton Acro-Yoga. When did it get started? Is it a weekly class, or a group of interested people? (If it is a weekly class, when and where does it meet, and how much is it to take part?)

We started out about a year and a half ago at the Cape Breton Family YMCA. It was essentially a small group of friends (John MacPhail, Marianne Shalewa, Kendra Sabine and Matt Wadden) who all loved to practice yoga, but wanted something more. We slowly started playing with some basic acroyoga moves and it went from there. We were very rough starting out and it took us a long time to learn the basics, but we had lots of fun. We were only practicing once a week or so initially, but then it became more often as we got more people involved. We grew from 4 to 5 to 6 etc. We have never really promoted it ever until recently. Now, people are asking questions and looking to get involved. It is not set up as an “official” class, it is really more like a group of friends getting together to have fun and get a workout at the same time. We now get together 3-4 times per week and our moves are really progressing. In acroyoga you normally have groups of 3 people; a “base” (person on the bottom….male or female), a “flyer” (person on the top…male or female), and a “spotter” (person who make sure everyone is safe doing the moves).

2. Is Acro-yoga relatively new to the ‘yoga scene’ in general, or has it been around for a while?

Acroyoga is fairly new, especially in this area. Is has a huge following in Montreal (Montreal Acroyoga) and all through the U.S., who have been active for the past decade. They all have detailed websites (just Google “acroyoga” or look for it on YouTube) We all initially learned from YouTube videos which is why it took so long for us (the original 4) to learn. Now, we can teach people the moves in minutes. There are acroyoga classes, courses and workshops all over North America.

3. Why is acro-yoga so much fun? (It certainly looks like fun!)

Acroyoga has a very powerful effect on people. Just about everyone begins by saying “No, I can’t do that”, or “I’m not strong or flexible” etc. But acroyoga is all about TRUST, PLAYFULNESS, and MOVING OUTSIDE YOUR COMFORT ZONE. People gain confidence, and lose a lot of their fears. You are often handing over control of your body to another person. There are easy moves, and very complex routines, so there is something for everyone literally. Those people who join us for one night are usually addicted ! It is so much fun because as you are learning, you are falling on people (safely), bending into silly positions, and doing things you may not have done in 10 or 20 years (i.e. playing on the floor). It is very common to “get the giggles”. We have lots of laughs !!

4. What was the purpose of doing the yoga out on the skyline trail, was it for a particular reason or just for fun?

Getting outdoors is always fun for those who love yoga and acroyoga. You can do both anywhere, anytime. We were just looking a Youtube video a few days ago called “Acro Yoga Flash Mob” where about 20 acroyoga people just set up on the sidewalk by an organic grocery store in San Francisco, and started practicing moves. We want to get out to a bunch of places that are a great hike and also provide a unique backdrop for some amazing acroyoga photos. What better way to promote the practice? The Skyline trail is one of those spots. We were blessed with an absolutely beautiful, clear day where you could see for miles. The sun was out and so were the smiles!

If you’re interested in Acroyoga in Cape Breton, you can check out the Facebook group or email John MacPhail: John.Macphail@investorsgroup.com