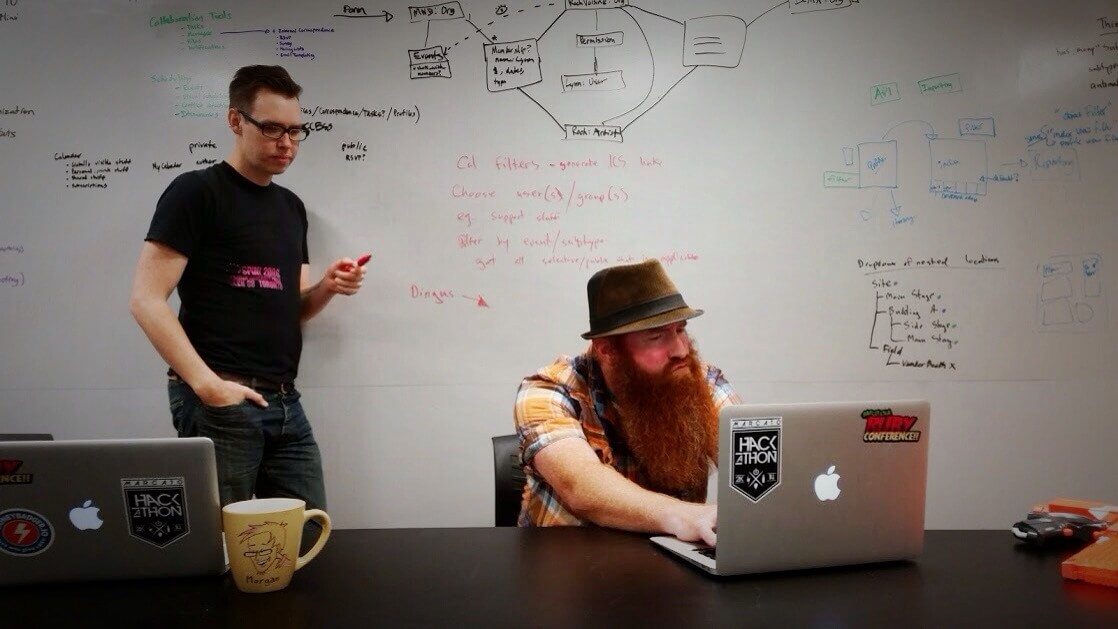 I’m going to Build Something Awesome!

At least, I’m going to try.

I’m absolutely not a developer, but I am a designer, and I’ve been dipping my toes in the development “pool” lately, at work, learning some PHP for a database project. So, I was excited to hear about an upcoming event right here on Cape Breton Island called a Hackathon, taking place over one weekend, where I would get to stretch my creative muscles, meet a bunch of new people, eat free food, and learn cool stuff too. Oh, and maybe even win $3000.

(Also, and this is not the least of my reasons, I’ll admit: I get to see Eric Lortie’s rad long ginger beard in person! I hope it’s as glorious as it looks in photos.)

(Oh, that’s not the reason you attend events? To see gloriously-long beards? Hmm.. this is awkward.)

Anyway, what the heck is a Hackathon? From Marcato’s press release: “Hackathons are popular, community-based computer programming events that take place all over the world, in which software developers come together to collaborate and compete against each other, either in teams or individually, to create new software in a limited amount of time. Popularized by tech giants like Facebook and Google, Hackathons have become a unique aspect of the modern tech culture.”

Aforementioned owner of a rad ginger beard, and Development Team Manager at Marcato, Eric Lortie, says: “Every industry could benefit from events like hackathons. How great is it to see so many different people come together with their peers, in some friendly competition, in order to build something awesome? Amazing products that will hopefully contribute to amazing communities! We’re very fortunate to work in an industry where it’s so easy to see these events come to fruition. Things like hackathons are already a prominent part of the tech culture and they help make it better for everyone; from new developers just starting out and looking for experience, all the way to the most experienced folks.”

Since I’m really new to the idea of hackathons, I asked Ethan Fenton, Marcato’s Marketing Manager, about what sorts of things people actually build at these events. He said,

“The hackathon theme this year is #BuildSomethingAwesome, so it’s broad, but we think for our first year we didn’t want to limit any amazing ideas. Here are some ideas: A browser plugin for saving and customizing recipes, a web-app for building stage plots for music festivals, or an app for finding and securing produce at the Farmers Market. Apps can be built in any language/framework, and to be clear, nobody is expecting a complete piece of software to be written in 2 days — the best proof-of-concept or most original idea can still win over a complete, working app!”

Find out more and sign the heck up here! And I’ll see you there!

11 Responses to hack it!