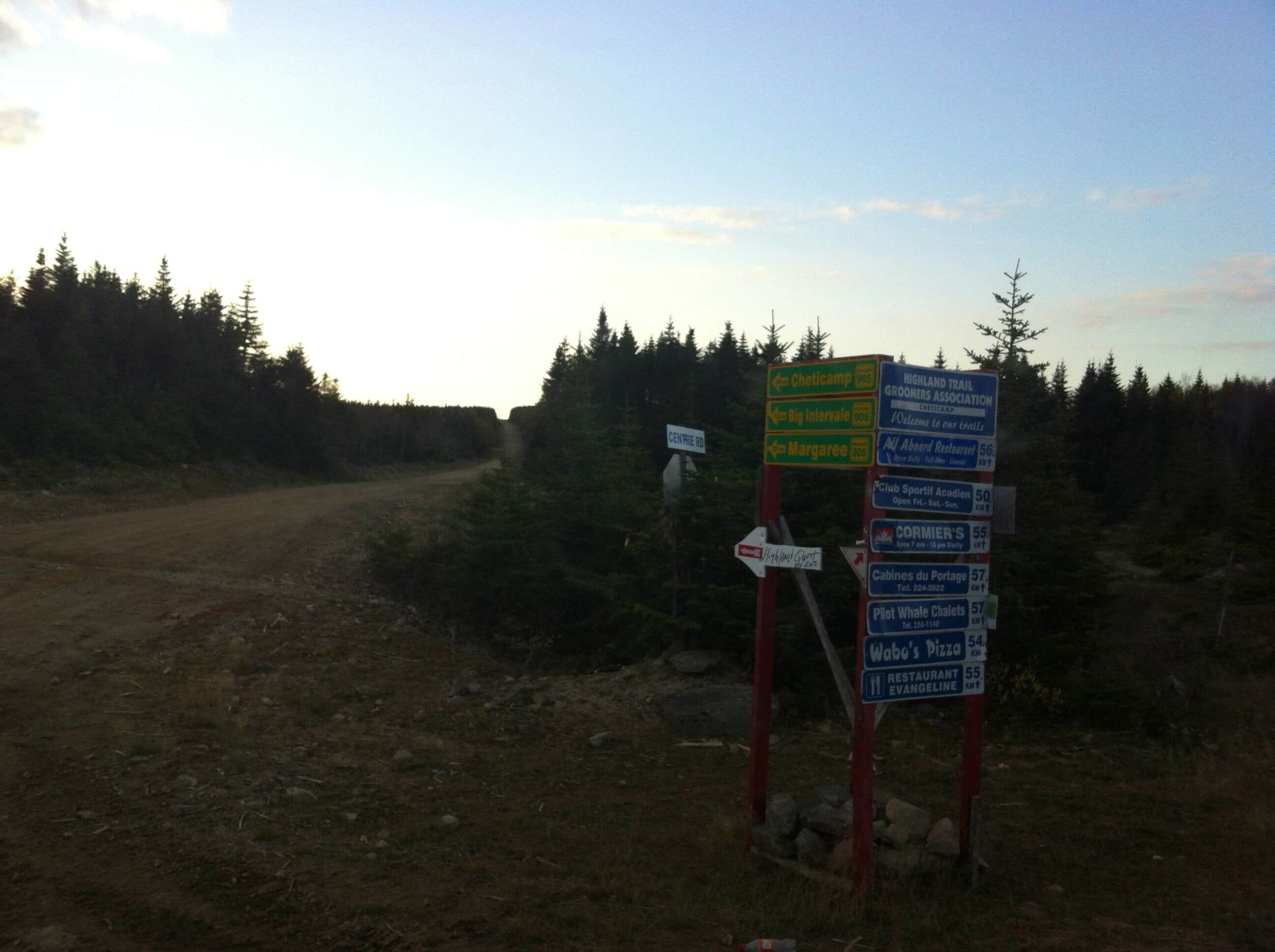 Since I was a teenager, I had heard about Cape Clear.

The first time was from my friend Morgan (hi hon!), who came in to visit me at the pottery store where I worked in the summers, and told me about how she’d been up to Cape Clear.

“Where is that?” I remember asking, and she said it was in the Highlands, and you had to take the Highland Road to get there.

The Highland Road, for those of you who don’t know, is a series of roads put in by the logging company to harvest wood from the interior of the Cape Breton Highlands. (You can read more about this part of the island here.) My Dad, who works in the woods doing treeplanting, laying out cuts, and other stuff I don’t know too much about, is frequently taking the Highland Road to work. You get on it in Middle River, and you can drive up to Cheticamp or Wreck Cove on it. They are all dirt roads, and they are marked, somewhat. Once you’re off the main road, though, it’s kind of a maze. Other than logging trucks, you’re also likely to encounter hunters, snowmobilers, or dirt bikers, depending on the season.

And I had never been up there. Not even with my father who goes up there every week through work season, or my brother who worked up there with Dad for a time. I’d always just driven past the turnoff on Hunter’s Mountain and thought, “Maybe someday!” 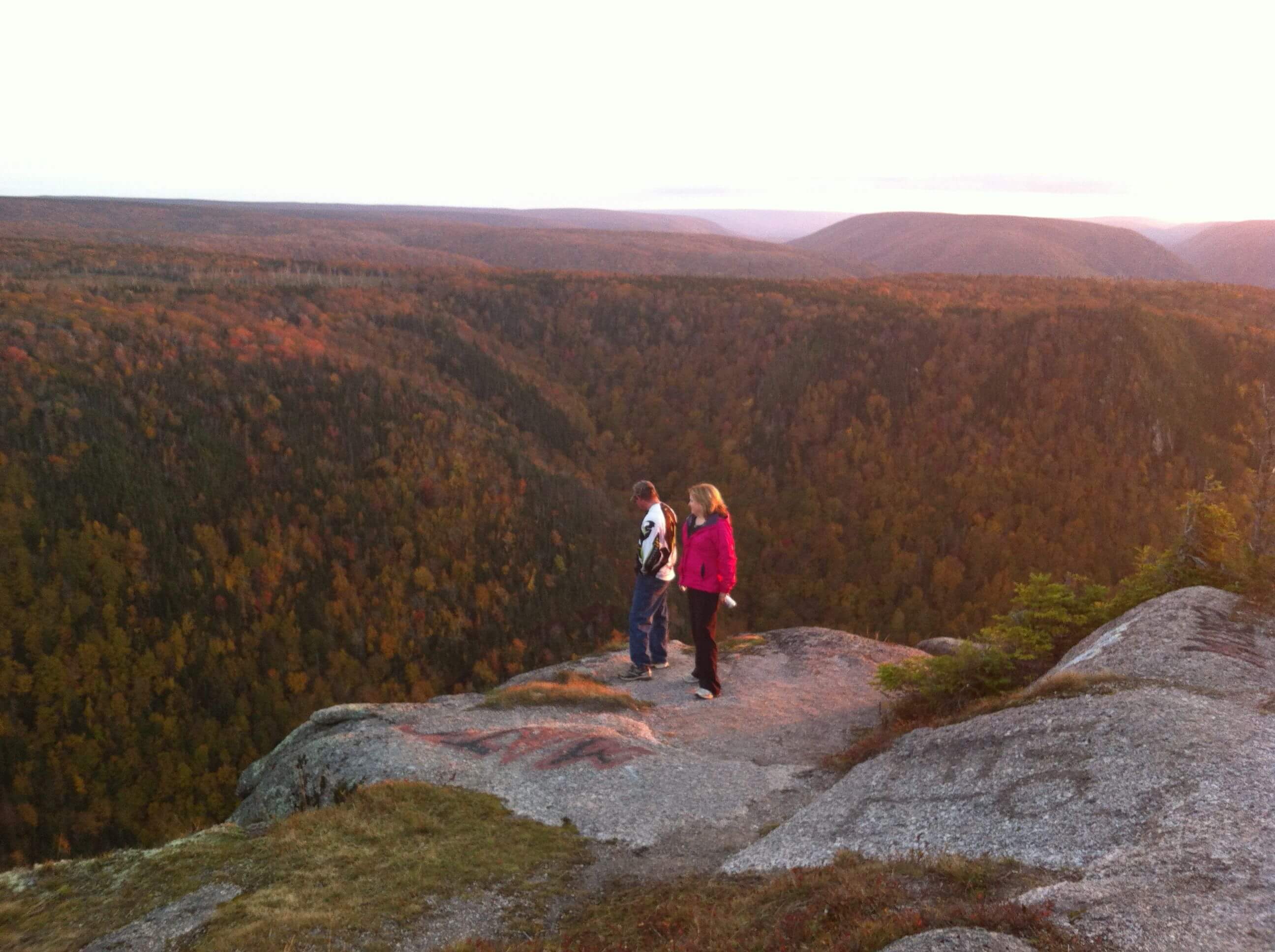 Well, someday came last weekend. My friend Tanya and her husband Ronnie (hi guys!) like to go up to Cape Clear on Thanksgiving weekend and they invited me along. 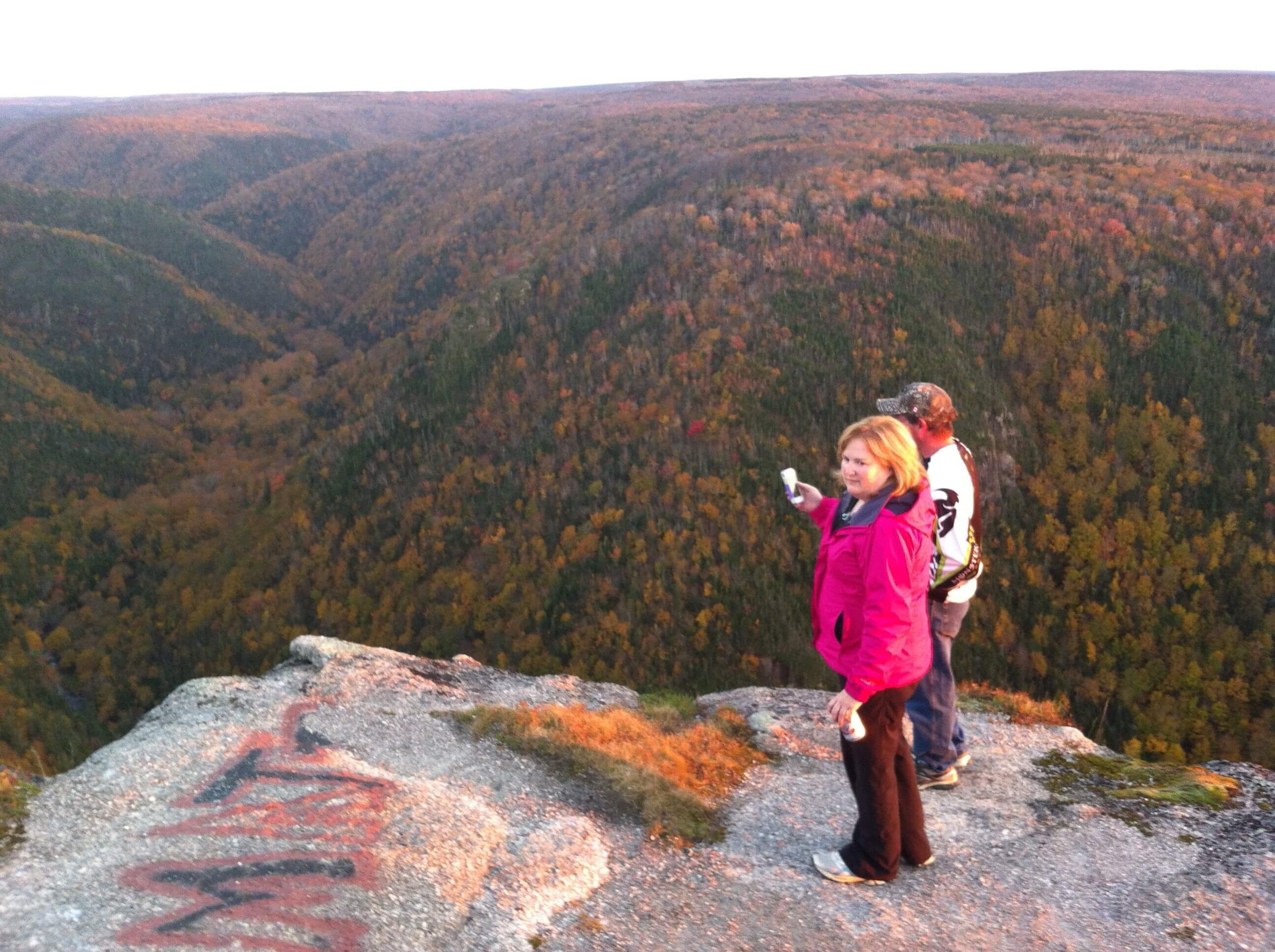 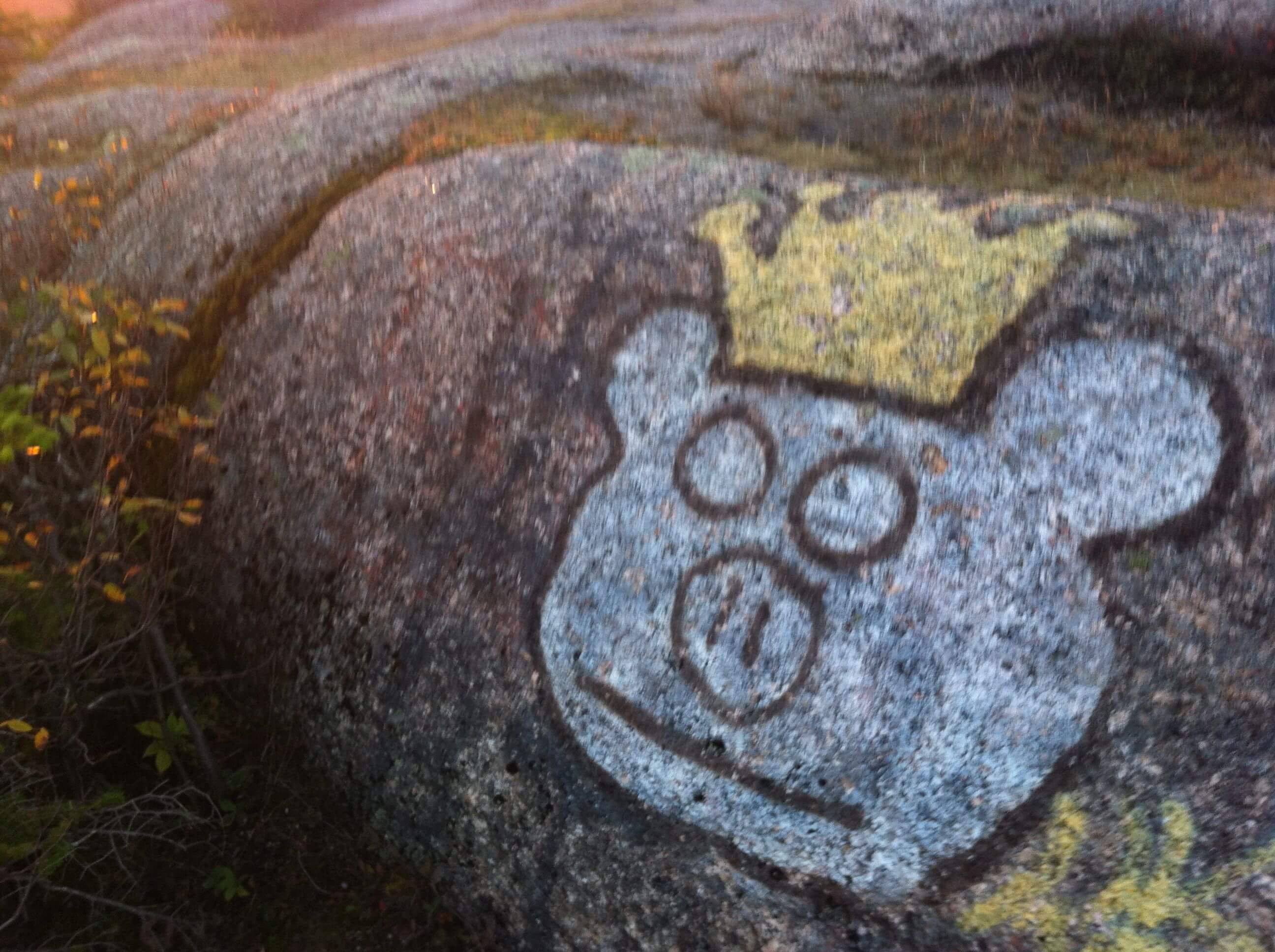 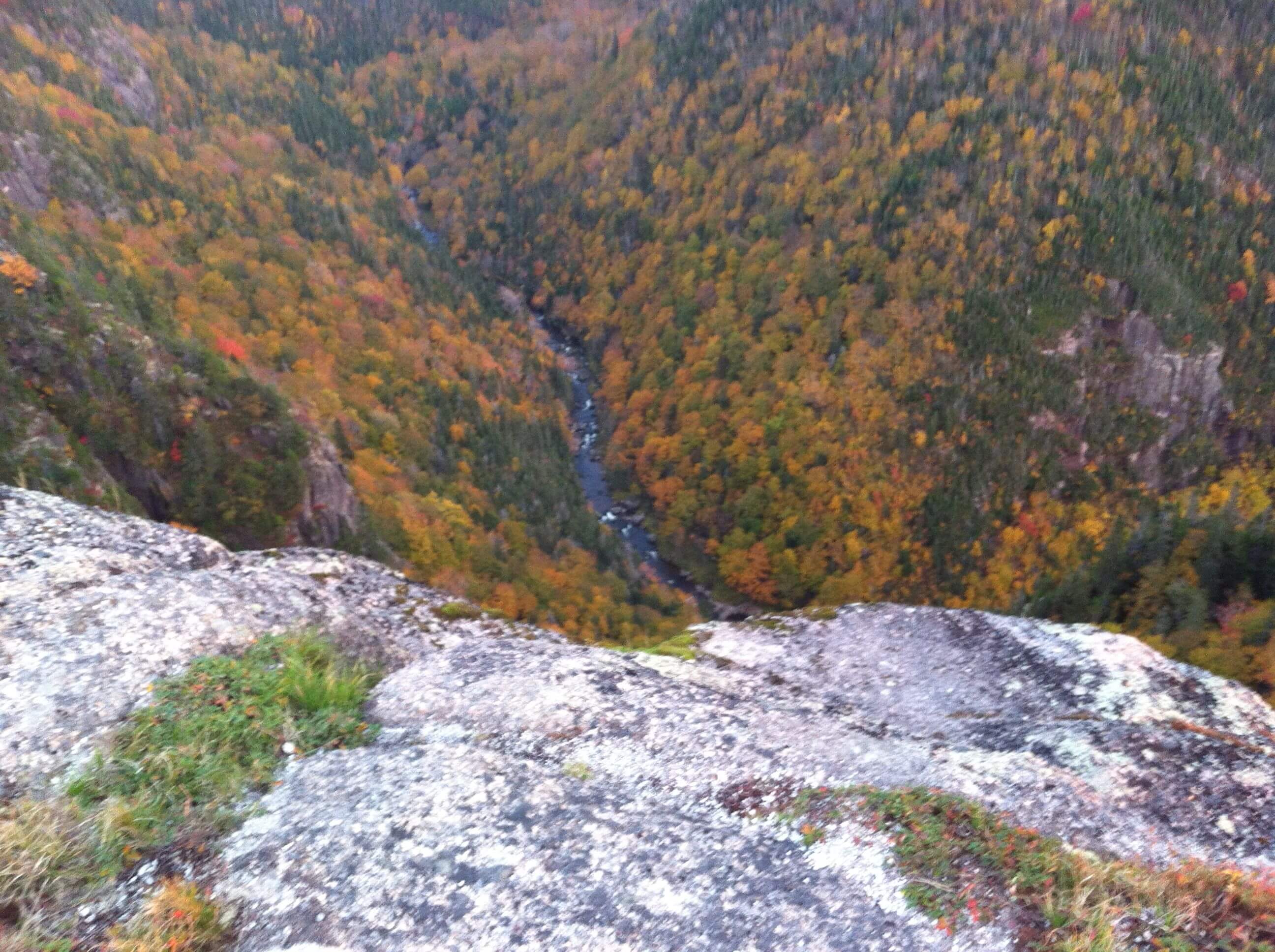 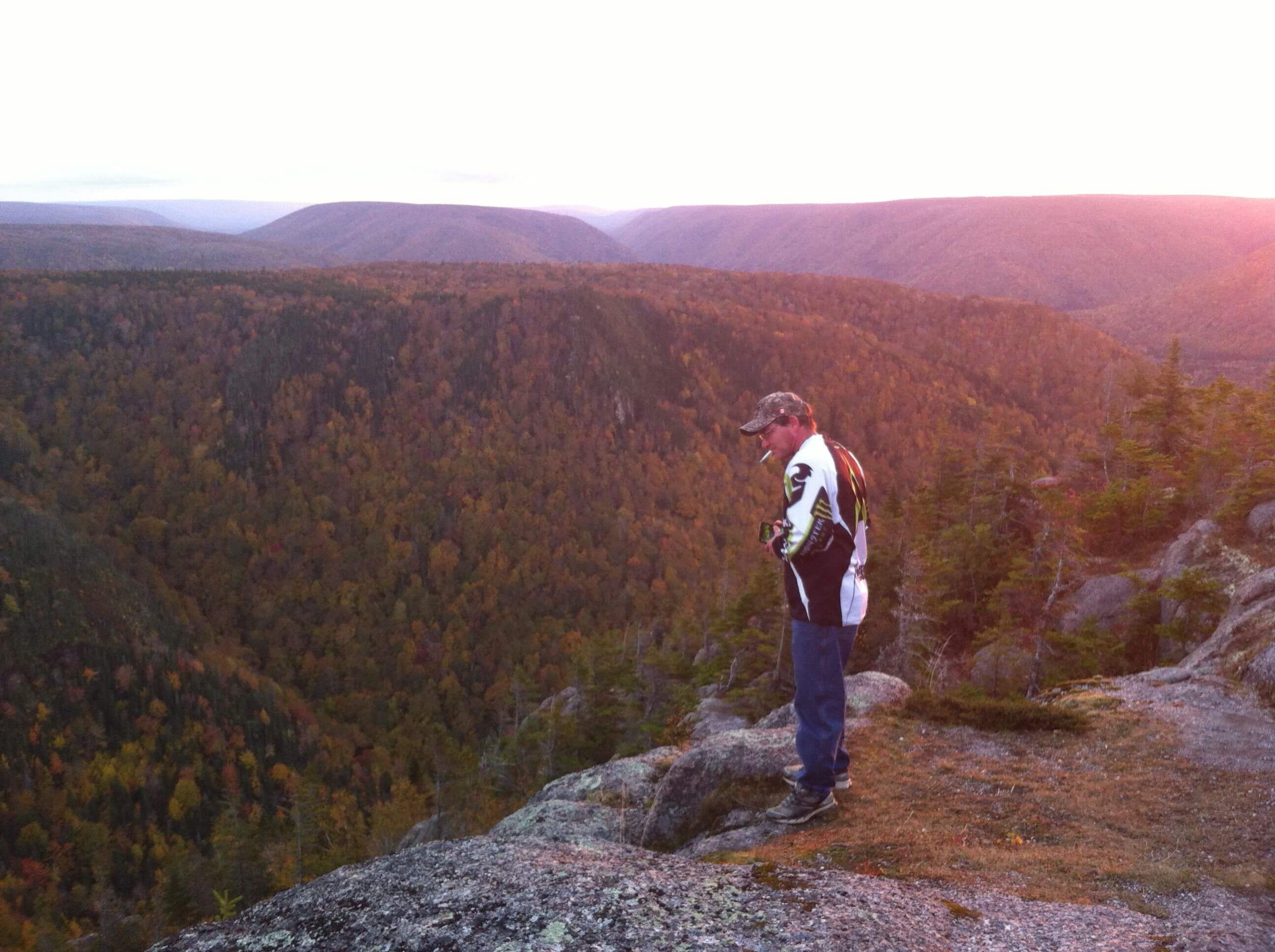 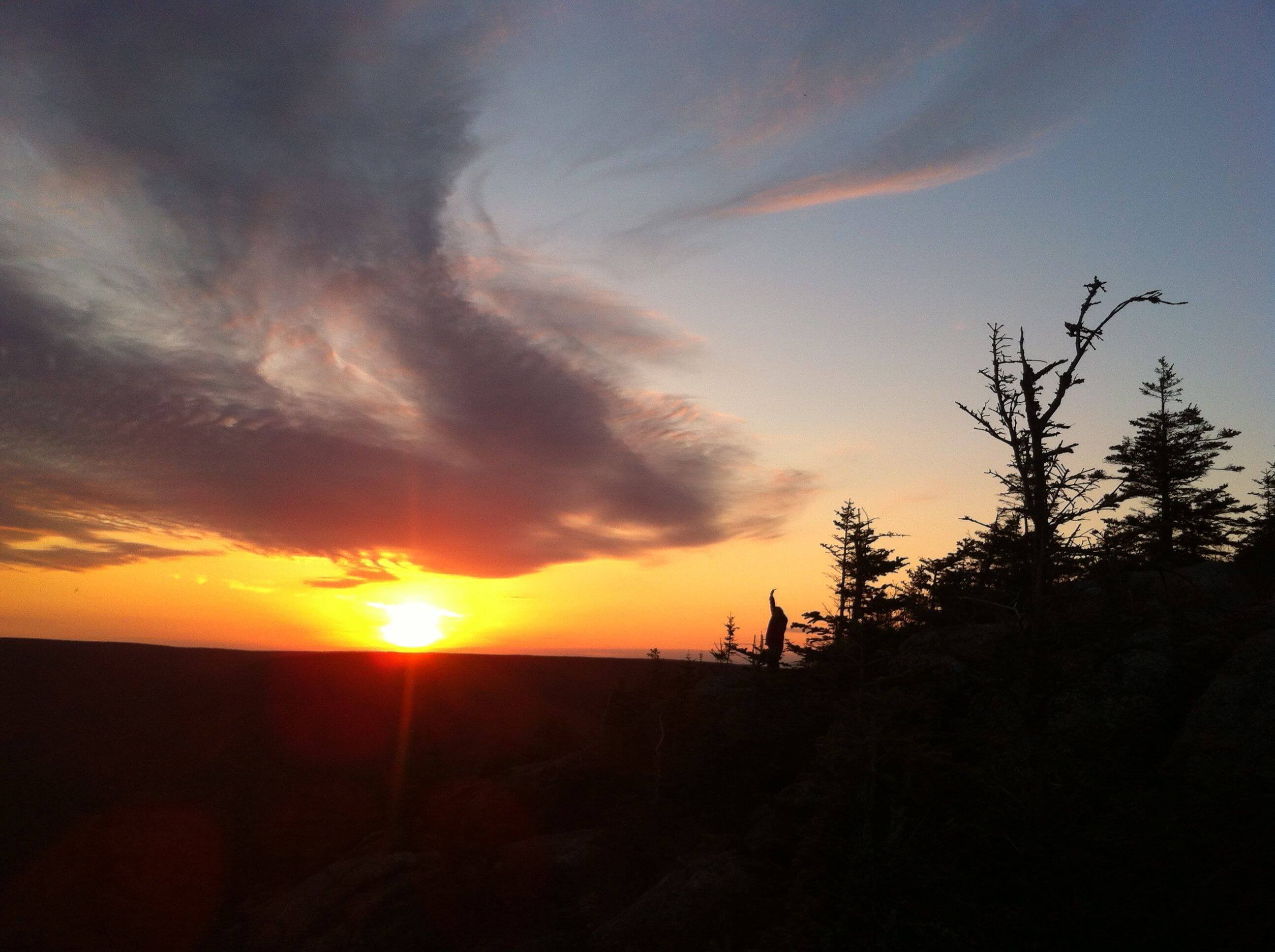 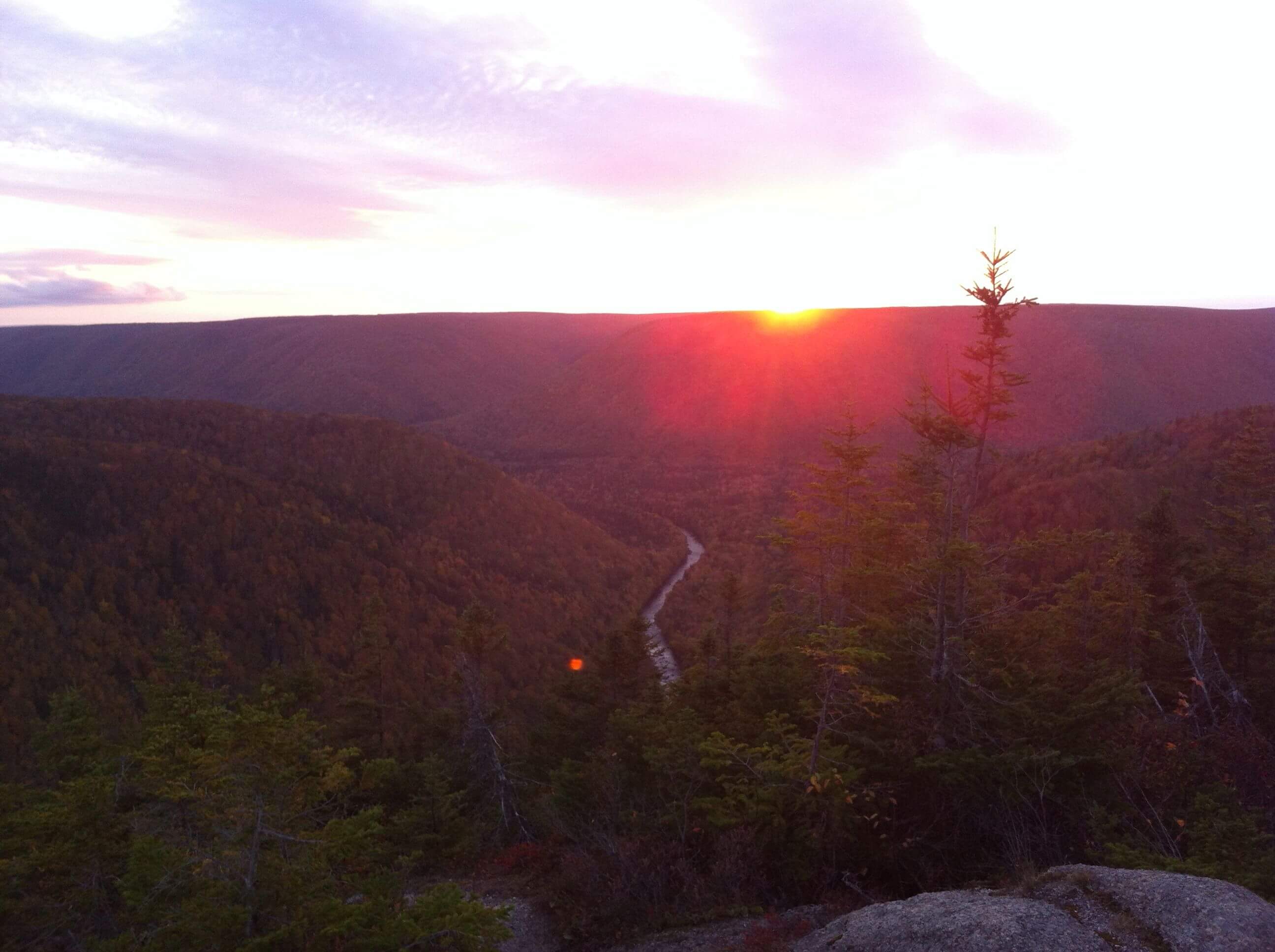 We went in time to see the sun set. 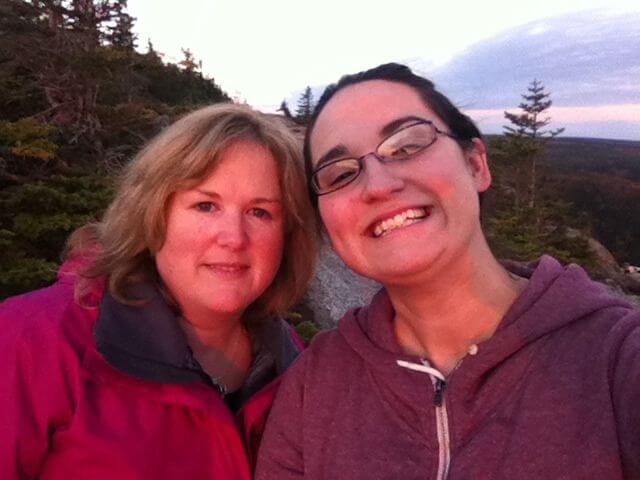 Oh and we took my friend and classmate Jacquie along too. Here she is on the left being goofy. As usual. 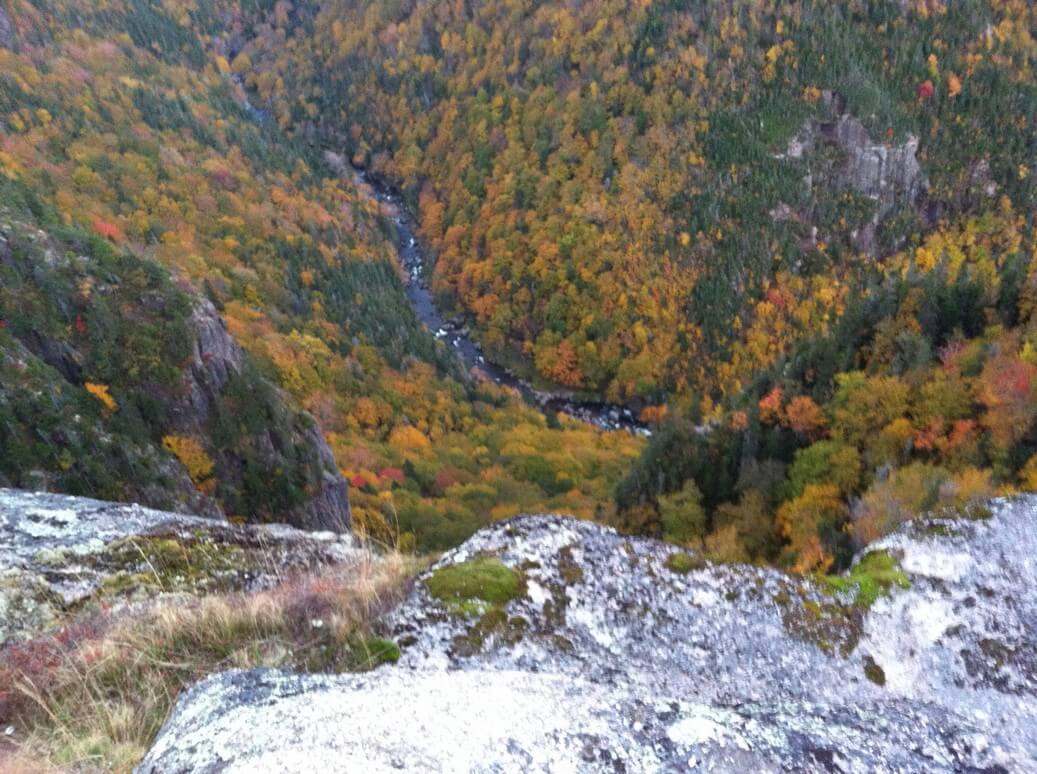 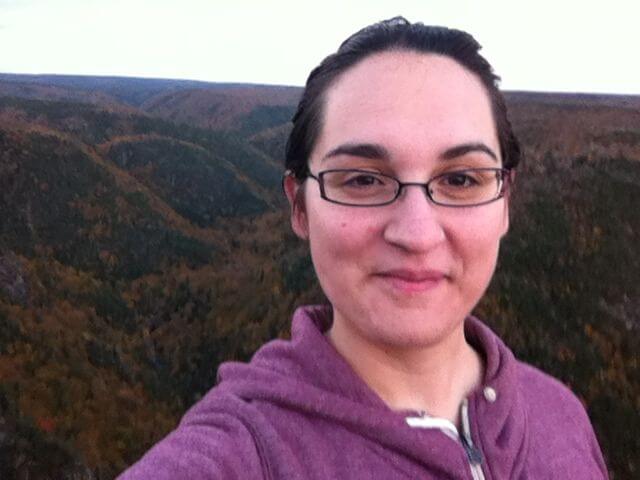 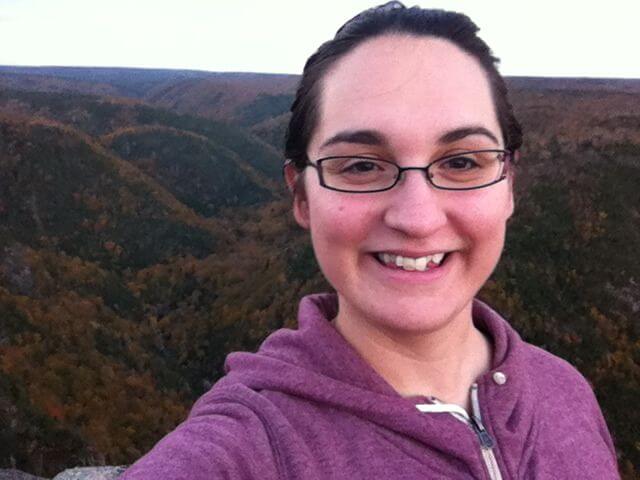 And this is my “trying not to be nervous, pretending everything is just fine” face. How many pictures can you take of the drop off and the Margaree River way down below? Apparently a lot! Ronnie ducks down below the ledge, and terrifies us ladies, who stand far back. (Can you see him?) Tanya taking a picture, and waiting for Ronnie to fall. (Well, not really. But we were scared.) To get there: Drive to Middle River and up Hunter’s Mountain. Turn at the Highland Road (there is a sign that says Public Rifle Range). Drive 38 kilometers along the road, until you come to the Second Forks Road (there will also be a sign that says Cape Clear). Drive another ten kilometers. Whenever you come to a fork, go the way that looks the most-travelled (it will be fairly obvious). If you have an ATV you can go all the way to the end, but if not, park and walk the last 100 m because there are massive puddles and big rocks in the road. If you need better directions, you can either just Google it (there are actually lots of sites!) or check out this geocaching website I found.

And this one has aerial photos of the look off – definitely worth a peek.

Edit: a reader commented the following, and it’s definitely a good point: “If you’re not familiar with the highland roads, I would suggest picking up a map of the area before you head in. It’s a maze-like network of roads and would be pretty easy to get lost if you took a wrong turn. Make sure you have a full gas tank.”

To get a map, contact the Department of Natural Resources office nearest you: http://www.gov.ns.ca/natr/staffdir/offices.asp.

Second Edit: A friend showed me this picture he took of when he rappelled down Cape Clear! What the f-bomb!