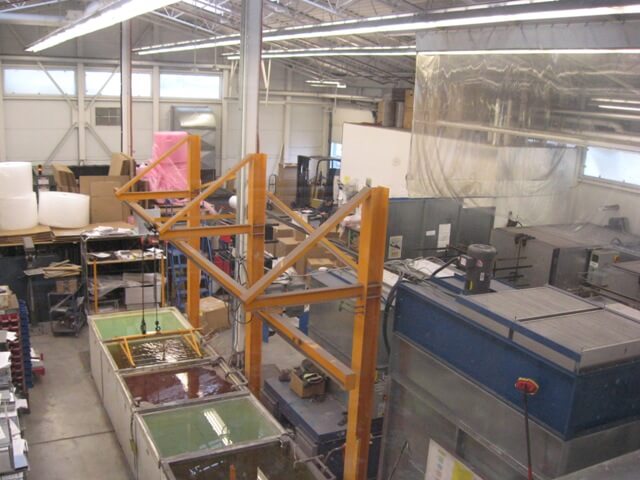 The manufacturing side of the building.

Just to give you an idea of how backed up I am in turning raw material (photos, written interviews, etc) into actual blog posts, I visited Protocase for this piece back in March. Yikes!

Although, maybe with such a vibrant, interesting place as Cape Breton as my subject, that’s just the way it’s got to be.

Anyway – back in March of 2012 I visited the premises of Protocase Incorporated, a Sydney-based manufacturer of “custom electronic enclosures for engineers and designers,” on the invitation of my friend Alicia Lake‘s husband, Douglas Ronne. (Note: I had no idea what “custom electronic enclosures” were before I set foot in the Protocase building. But maybe that’s just me.)

Douglas lives in Baddeck, where I live, and he works as the Lead Software Developer for this small but growing local company. When he heard about my blog, he said I definitely had to come visit his workplace, as he felt it was defying the dominant narrative of Cape Breton being a difficult place to start and run a business. (Protocase is actually always looking for people to hire!)

So, I went, and I toured the building with “the two Dougs” – both Douglas Ronne, and his boss, Doug Milburn – getting to see the manufacturing process and meet some of the workers. It was a lot of fun! I even saw a laser at work. They are super fast and so efficient, going exactly to the point they are meant to go to, doing the work, and zooming off to the next point, stopping on the nose. Like Douglas said, ‘if/when the robots take over the world, we have no hope.’

Both Douglas and Doug were kind enough to do Q+As with me, as well, which I’ll share in parts 2 and 3 over the next couple of weeks.

Enjoy your tour of Protocase!

John Lord, CAD operator, looks over a client’s design before submitting it to the manufacturing process.

The office side of the building. Lots of natural light!

The manufacturing side of the building.

A major focus of the company is on quality, and constantly doing better.

A piece of metal just cut with the custom holes.

The actual laser part of the machine.

The laser cutting a sheet of metal.

I just really love the words “laser turbo” and couldn’t pass this up.

After the metal is cut, then cleaned, it goes to the press to be bent into shapes.

Then it waits for dipping and cleaning.

Tanya Carroll – doing something to do with rivets, perhaps? I forget.

Touch computer screens throughout the manufacturing plant help to keep workers informed of each job they’re working on.

The little room where the pieces are hung, to be sprayed with various coatings.

After the spray paint/coat, hanging to dry.