a brief trip to St. Peter’s Yesterday I drove down to St. Peter’s, via Highway 4. I think I’ve gone that route maybe once or twice before. Being from Baddeck, I never really got much of a chance to drive it! It’s super pretty, with lots of views of the lake. Once I got to the village, I had a bit of time before the meeting I was there for, so I went down to the canal to check it out. They were just shutting the locks for a sailboat passing through. After the meeting, I went looking for lunch on the main street. I parked and walked around a little bit, too. I’m a nerd for way-finding signage in towns. 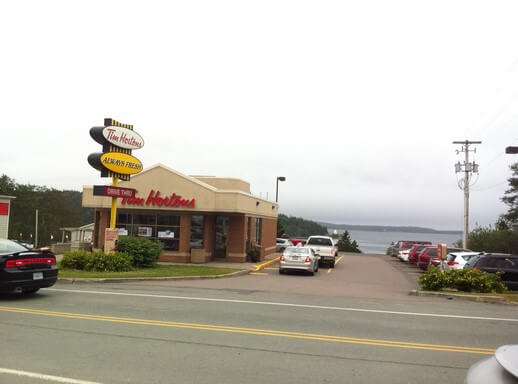 And of course I had to take a picture of Canada’s prettiest location for a Tim Hortons! On my way home I drove down to Point Michaud and had tea with a friend who lives there. It was raining, and I didn’t get down to the beach to take pictures. (This is my post about the Point Michaud beach, from 2012, and has lots and lots of pictures in sunshine of the beauty there.)

That area of the island is so pretty, and is far enough away from my home communities that it feels like a ‘getaway’. Oh and I should mention that my friend Shannon, who works at C&M Video, carries my stickers and postcards in her shop there! So if you’re in St. Peter’s and want to pick up some “I Heart Cape Breton” stuff, stop by her shop.

Have a great Tuesday! Today I’m meeting up with some friends from New Hampshire who summer in Cape Breton, for a rad meal at the Lobster Pound and Moore, one of my favourite places to eat, not just in North Sydney but on the whole island and possibly the world, at least what I’ve seen of it. Seriously, so good. Also I have a massage booked for this evening… not a bad day!

4 Responses to a brief trip to St. Peter’s