Our Man in Judique – Dwayne MacEachern 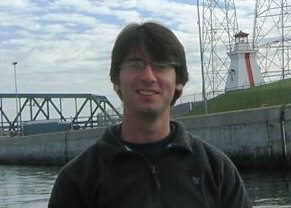 Dwayne MacEachern on the right side of the causeway.

Hi folks, I’m Dwayne MacEachern from Judique and I’ll be contributing now and then to Dream Big Cape Breton. But first, a little bit about who I am and how I got here: Back in 1996 I finished high school at Judique-Creignish Consolidated and had no idea what to do with myself. All I knew was that Cape Breton was no place for young people and I had to get out of here, so I packed up and moved west. I spent almost four years in Antigonish, living a university student lifestyle without ever being enrolled at St. Francis Xavier, or St. FX, which was good because looking back if I had been a student I would not have been a very good one.

In 1999 I set my sights on a new horizon and headed to Ottawa where I embroiled myself in the high-tech sector. For two years I worked and lived with a friend of mine from Mabou, and we talked about two things that whole time: fibre-optics and Cape Breton. When the bottom fell out of the industry it presented an opportunity to move back home, so I stuffed my trusty blue Subaru to the gills and said goodbye to Upper Canada.

Home again, I still hadn’t found what I was looking for in terms of something I was passionate about. I was in the automotive service sector once more, and while I truly love working on cars and have the greatest respect for good mechanics – that tends to happen when your father is one – I still had no idea how to go about affecting change in the community in ways that would prevent kids from graduating high school and feeling like they had to leave, as I did. So, I started to think about how I could learn these things.

That September, I started at St. FX, this time ready for the challenges of university life. That same month I learned of a meeting in Judique for something called the Judique & Area Development Association. What? A community development group? This was the same sort of thing my friend and I talked about in Ontario: the ability to make things happen back home! I went to the meeting and the rest of the story has been nothing short of the most wonderful, frustrating and altogether rewarding groups of experiences I could have ever imagined.

From my involvement at home and at school, I have learned a new appreciation for where I am from and that there is indeed a place for anyone who wants to be here. It doesn’t seem like it sometimes, but I believe it to be true above all else, and the reasons for that belief will be the kinds of things I’ll be writing about in my upcoming contributions to this site. My passion is community development, and I hope to convey that in my writing by using less of ‘I’ and more of ‘We’.

2 Responses to Our Man in Judique – Dwayne MacEachern