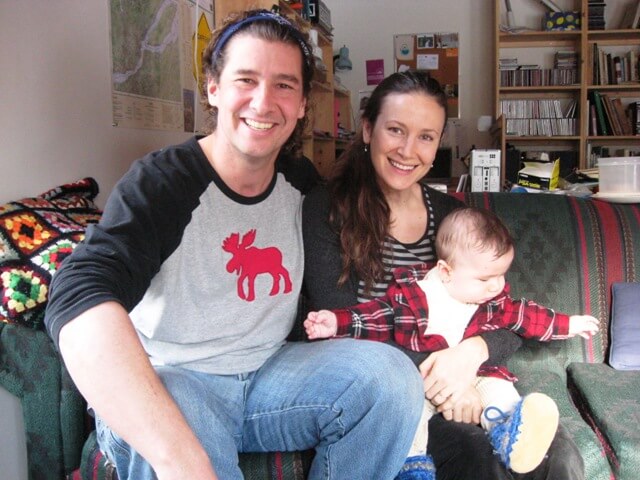 I met Melanie and Jeremy White at a yoga class last year, and soon began seeing them at the Baddeck Community Farmer’s Market, too. They were enthusiastic when I approached them for an interview, and even traveled to my home with their five month old baby, Everett, because their own home was under renovation. We sat down at my kitchen table two weeks ago, with a pot of tea and a tray of date squares from a local bakery.

Originally from Vancouver and Montreal, and Toronto, respectively, Melanie and Jeremy met in Costa Rica when he was working there and she was learning Spanish. Soon they were traveling and living all over Latin America due to Jeremy’s work in sales and business development for Bywater International. But, after several years there, Melanie says, “We moved back to Canada. We wanted to re-establish roots in our home country after so many years away, and despite not having any family or connection to Cape Breton, we felt enormously welcomed here.” 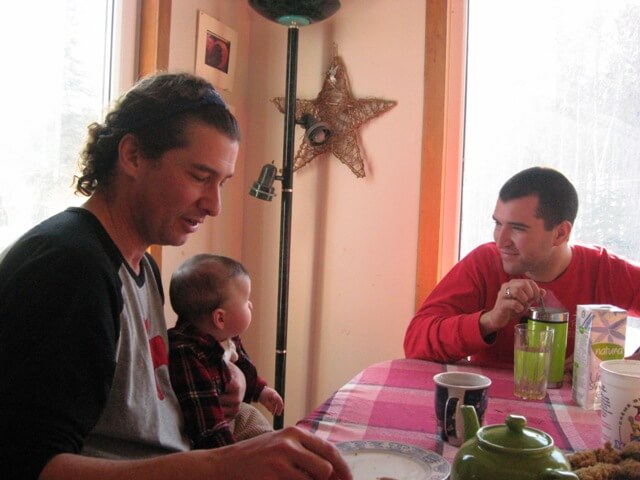 Jeremy sits with Everett on his lap while my brother Mathieu entertains the baby.

In contrast to the gated communities so prevalent in Latin America, Melanie and Jeremy find Cape Breton “almost like Little House on the Prairie.” A neighbor, with whom they’ve become almost like family, came by their property one day when they happened to be in Sydney for the afternoon, and blocked up the eight cords of wood Jeremy had piled there. “It was like little elves had come by,” says Melanie. “I couldn’t believe it.” The same neighbor also helped in milling up spruce trees that had been hit by the bark beetle epidemic. In return, Jeremy was able to give the neighbor lumber that he could then use in a building project.

“We managed to mill about six and a half thousand board feet of lumber from what we pulled out of the woods this spring. More than enough for, you know, a number of outbuildings! Our neighbor got a hundred percent of the wood he needed – everything except for the rafters for the roof on his new 30′ by 15′ woodshed.”

“I love that sort of relationship with neighbours. You don’t ever have to worry about paying somebody for something because you know you’re going to get him back, and then some, with something you’ll do for him down the road.”

Their land, an old farm, looks out over Nyanza Bay on the Bras d’Or Lake. They were in Nicaragua when they began looking for property and ended up buying the property sight unseen from Latin America because a competing offer had gone in that very day. But they don’t regret it.

“It was described as nearly a tear-down. But it was beautiful, it has the original floors. The view is really majestic, a sweeping view of the whole inlet up to the Baddeck River. And we loved the potential the land had for some of things we want to do. It was such a magic discovery.”

And now they’re on their way to launching an organic microbrewery. They’ve been pre-certified organic for their hopyard and apple trees through ACO. That means they submitted a farm plan and will be monitored through this year’s growing season. They’ve got ambitious plans for this year, too.

Jeremy: “We’re hoping to build the outbuilding that will house the brewery. We’re in the process of garnering finance for that and going through the initial planning process for how big, exactly where to build it, etc. We were going to do something smaller in an existing shop, but all my research into brewery startups is showing me that the biggest mistake startups make is going too small, believe it or not. It takes you just as long to brew 5 gallons as it does to brew 1000 gallons. So if business takes off, you don’t have the product, you can’t make enough. And even if you’re making as much as you possibly can with the smaller capacity system, you might be making – after costs and everything else – 20 grand a year, but you just can’t live on that. So you have to make the brewery big enough to meet the demand, and make enough money to make the process worthwhile. It’s a time consuming process. You can always start with a bigger setup and only brew, you know, once a week, and allow it to gear up. But you need to go in with that capability, because reinvesting in a new brewery house system after one year is the kiss of death in the brewing industry.” 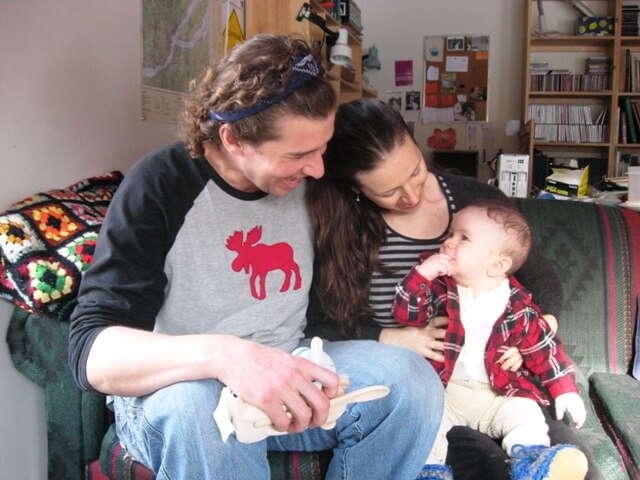 Baby Everett is growing nearly as fast as the hops will!

While they work on building the microbrewery and establishing the farm, and Melanie is full-time caregiver for baby Everett, Jeremy earns a living as a headhunter, or recruiter, for various New York firms that specialize in recruiting for capital markets employees. He’s able to do this completely from the farmhouse, via high speed Internet and the telephone. He speaks to traders in New York who are in environments too hectic to do anything other than shout their private phone line to him over the phone before hanging up, while he’s looking out at eagles flying over snow-covered Nyanza Bay. Little do the traders know that even though they’re making a million dollars a year, they’re speaking to someone who’s already living his dream life.

This spring and summer I’ll visit Melanie and Jeremy’s farm to see what the hop production looks like, and take some photos. If you have anything you’d like to ask the Whites, leave a comment and it will get to them, or just wander around the Baddeck Community Market and look for the really tall guy holding a baby.

10 Responses to Beer, boards and babies – Jeremy and Melanie White