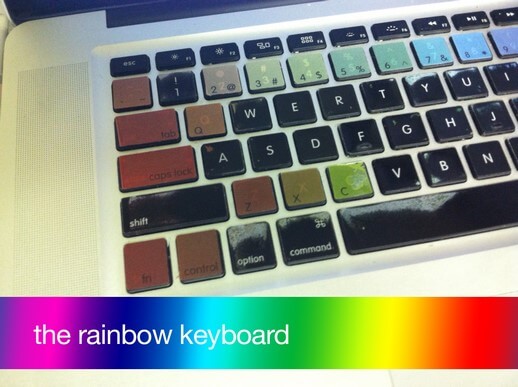 I get a lot of comments on my rainbow keyboard so I thought I would share a little bit about it.

Basically, back in May I saw rainbow decals on a Mac keyboard, on a blog called The Dainty Squid. Her blog post was talking about the decals a whole year later, and how well they had held up. I loved the look and decided to buy some for myself as a grading day present.

(Spoiler alert that you can probably already tell from these photos above: mine didn’t hold up as well as The Dainty Squid’s did.)

This Instagram photo shows them when they were brand new, four months ago:

And this one shows them just a month later. You can tell that one key (the “D”) had already peeled.

@lenadunham and lazy pizza for the win.

On most of the keys where I’ve peeled off the coloured part, there is still a piece of clear plastic remaining. One of these days I intend to shut the computer off and peel all the clear plastic decals off. I like the coloured decals that are remaining. It doesn’t look as it did in the beginning, but that’s OK. It still gives the keyboard a bit of colour and “fun factor”. People notice it both in Instagram photos and in real life, and we chat about it. I like that.

Would I get them again, even though they didn’t hold up as well as I’d hoped? Yeah, probably. They’re fun and colourful, and for a workhorse computer like this one that I use for creative purposes daily for hours, it’s important to make it a fun experience. I’ve also realized which keys get the most use, as sort of a side effect of the peeling process. And I’m a nerd for random facts, so it’s been interesting to see that the only letters that didn’t peel yet are “Q” (not surprising) and “P” (kind of surprising).

Have a great Wednesday!

This entry was posted in Art, Day to Day Life, Design, For Fun, Work and tagged graphic design. Bookmark the permalink.

1 Response to the rainbow keyboard