5 Tips for Cleaning Up Your Neighbourhood 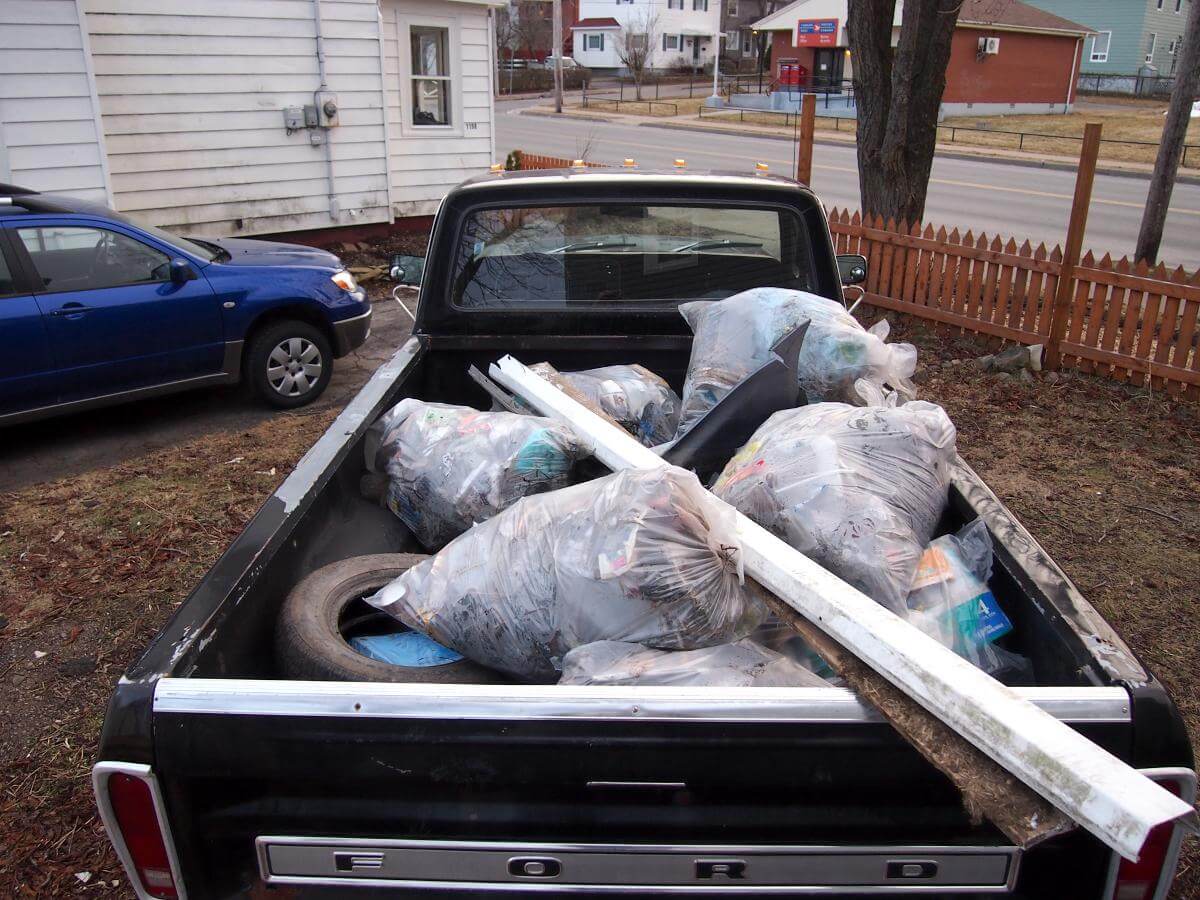 My friend Brian is notorious for cleaning up the neighbourhood where he lives – he takes truckloads of garbage bags to the dump every couple of months – so a month ago I asked if he would write a post for Earth Day about cleaning up litter.

“I’m not sure I’m the best one to write it,” he wrote back. “It’s hard for me to take the gentler approach. Sometimes people think I’m too hardcore.”

But, he gave it a shot. And I love what he wrote! Sometimes the gentler approach is good, but sometimes you need a good rant and a realistic, yet optimistic, list of ideas and thoughts. (If that’s hardcore, sign me up.)

All photos are mine except the first one of the truck (courtesy Brian Dean) and the one of the tire planter (courtesy A Beautiful Mess). 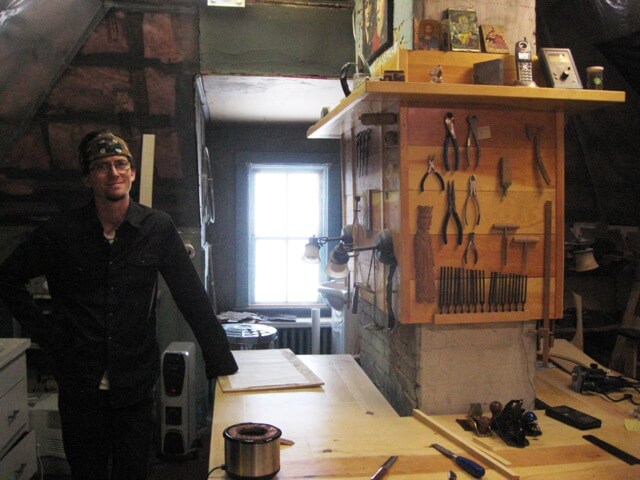 Brian Dean’s 5 Tips For Cleaning Up the Neighbourhood

Then put aside any hopes of glamour, and get out a pair of gardening gloves – you’re about to get dirty. Cleaning up your neighbourhood from the trash that blows around with Cape Breton’s windstorms is not a fun business. But it doesn’t have to be dull.

There are feelings of anger that can and will arise – and who doesn’t like a good, angry Metallica song every once in a while? We all love getting angry, it’s what passion is made of – anger added to love. You’re pissed off that people can’t deal with the garbage they create, and you love the land which they’ve polluted with it. You want revenge. This is the reality, and there’s no sense glossing it over with spiritual glory or anything else.

Think of it like John Lennon’s “Instant Karma” – you get back right now, what you put into this: a clean place to take evening walks with your family dog. 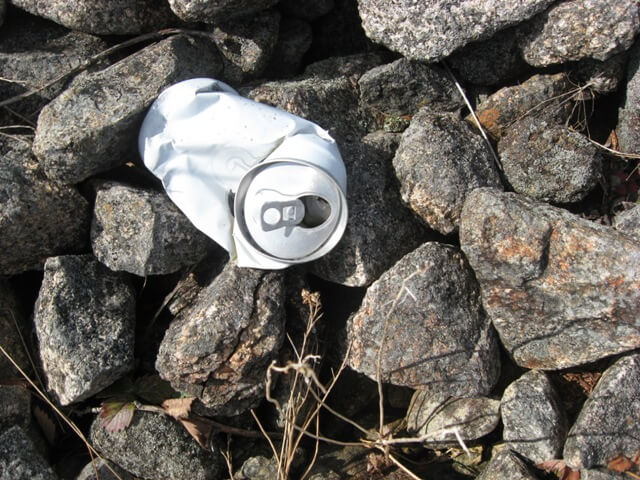 Don’t get over-optimistic and start cleaning up properties that you don’t visit on a regular basis – you’re going to want to have some sort of feeling of accomplishment, it’s not something you’re going to want to spend every weekend doing. Me, I do it about once every 6 months, with random small-bag (grocery store size) every week or so on walks with the dogs. I think of those walks as maintenance.

So, you’re ready to stop looking at trash. Good start! We should all be so proud to respect our surroundings, our land. God knows the people who can’t manage to put things in garbage bags and put them out on the right day (I know, it’s rocket science!) could use some of your “Oomph”. I like to think of garbage collecting day as a day to recollect myself. I start out happy – happy it’s a randomly warm day in February, or an especially cool Summer day, that I can go out into Nature and redeem it from the Mongol horde. And make no mistake about it – the frogs will thank you. Everyone else will just think you’re crazy.

So embrace it. You’re weird. And you’re about to go pick up other people’s crap.

I average about two large bags of garbage every hour. The majority of it is coffee cups and chip bags. The adults throw their coffee cups out their car windows, and the kids walking to school throw their (AHEM) “breakfast” wrappers on the ground… or rather just plainly drop is a better phrase. I’ve seen it all with my own eyes. It makes you wonder if these people ever wash themselves. You can’t want to love someone who doesn’t know how to “keep it clean”, if you know what I mean!

You won’t run into many dangerous things, unless you’re in a particularly suspect area. I never have, and I stick to open fields, you know, the kind of place where when you’re done with the fast food lunch sitting in your car, it’s such a tempting place to chuck your brown bag (ahhh, our grandmother would be so proud). 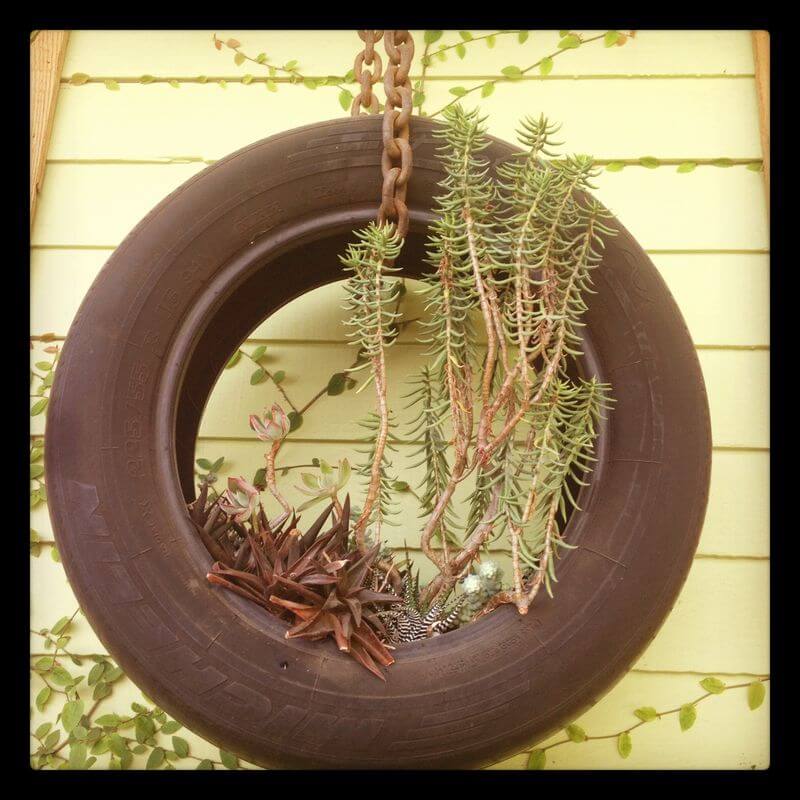 A fun idea for what to do with old tires (once they're cleaned up, of course!) This photo is from A Beautiful Mess. This post: http://abeautifulmess.typepad.com/my_weblog/2012/04/happy-travel-snapshots-in-california.html

3. Put the stuff in clear bags because when you take it to the dump, that’s what they’ll want to see.

They won’t give a damn if it’s got recyclables in it or not – the guys at the dump probably don’t recycle more than they have to, themselves. They’re just cool dudes, and they don’t want any trouble in life.

That goes for you too. Which means that you also can’t bring them any old tires you pull out of the swamp. Important point – you pay for tire disposal whenever you buy new tires, regardless of whether you dispose of old tires or not. The reason is that ALL TIRES can be brought to ANY TIRE OUTLET for disposal, without question. That is the reason for the fee, it is required by law that the outlet take the tires back. They do not go to the landfill. If only the people who dumped them in the swamp knew this in the first place, they would have put them in their trunk and taken the easy route – not walking them out to the middle of a swamp and accidentally done some exercise.

But such is the way of our complicated modern society – there’s just too much to know about too many things sometimes. It’s a fact of modern life we have to live with, and so are old tires in empty fields and swamps. Which brings me to a very obvious point… 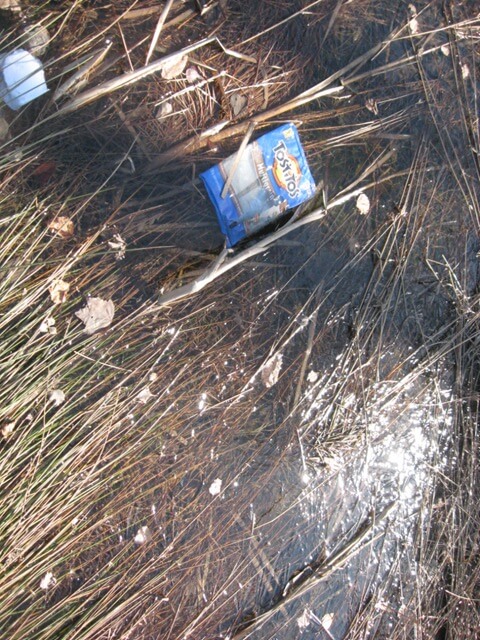 Personally I don’t recommend getting in “too deep a water”, but I do enjoy the challenge of that “just out of reach” piece of refuse. Last week I pulled half an old plastic bumper out of a wetland – the smell of the bog it brought to the surface was not attractive, but was the taste of chucking it into the back of my truck ever sweet. It’s a lot like pinching pimples – that instinctual urge to get rid of the bad stuff, perhaps why “Asteroids” is such an addicting video game!

You can think of this as Asteroids. I think of it as vengeance. I will win. I will win against the idiots who do this to our landscape. Every piece I pick up, I feel like Godzilla climbing higher up that building. It’s perhaps unhealthy to have these kinds of visions while picking up garbage. It may be the swamp gas. But it feels great, and I go home and I sleep better that night than I have all the previous nights that month. Because I won. You could eat off that piece of land after I’m done. 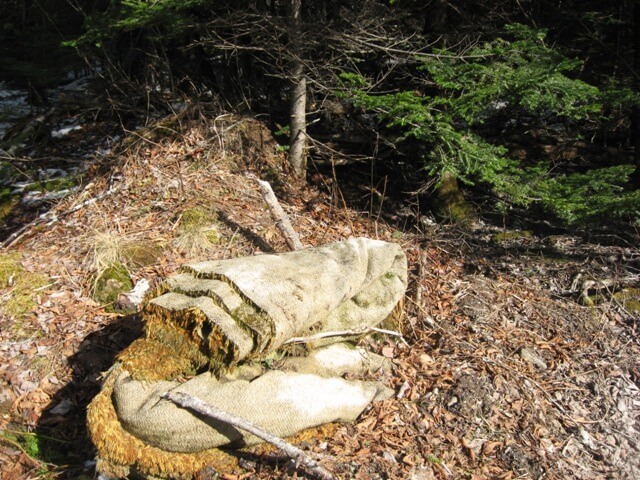 Garbage cleanup really ain’t much more than that. I hate to say it, but you’re not going to get a lot of glory out of it. And don’t expect any, but if you get it, let the glory roll off your shoulders. Next week you’ll see a plastic bag waving in the wind, hanging off that tree you just stooped under for 15 minutes digging out 10 year old garbage from. You can’t let it get to you.

Remember the world ain’t perfect, you’re just doing what feels right. Better than that, you’re doing something. You’re not just writing about doing it, you’re not threatening city council that you’re going to do it. Your knees are dirty and you’re winning the battle.

You’re winning, because other people will see you on your knees, picking up their son’s and their daughter’s and their neighbour’s garbage. And it’ll make them think twice when they see their son or their daughter or their neighbour throw crap that doesn’t belong in nature, into nature. You will make that difference. It is a slow change, but where you change the thinking of ten people, you change the thinking of hundreds of thousands of people. Great ideas are contagious, and so is wanting to live in a beautiful place.

People may not respect their surroundings all the time, but everyone gets down about things. They see a dirty field, they think “well who cares, why should I?” But lo, here is someone who cares, and perhaps then they think, “I won’t throw my chip bag out there, maybe it’s now become uncool to do. Maybe it’s socially unacceptable: here is the clean, open field to prove it.”

“I am the outsider”, they may begin to think when they drop that bag – their’s is now the only one. Maybe now they’re the weird ones!

But I’ll say this, and this is the final point because I hope it is the most remembered. At no point in your cleanup should you get the idea that you should show that you are higher or mightier than others. I highly recommend being as humble as you can be about this venture, and not making a fakey smiley show of how you’re Miss Fancy Pants and how you’re going to save the world.

People are secretly disgusted with their own messes. It makes them unable to be proud of who they are. Simple, quiet work is what you must undertake. Think of the Amish. I like to. They are hard-working people who don’t make a show of it.

You know, in your art, you may show off your achievements and be proud of those rare achievements in your personal life. Show off and proud of those things!God knows there are enough martyrs out there. But, don’t be a martyr when you’re cleaning up the neighbourhood, you’ll only rub people’s noses in their mess. Do it for the pure, unadulterated selfishness of the act. You’ll feel awesome about it, that you’ve done a secret, quiet something for you. And, your neighbours will gather a secret admiration for your work.

Some links to more info about recycling in your area:

5 Responses to 5 Tips for Cleaning Up Your Neighbourhood